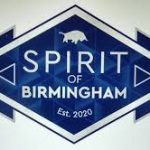 English, because it’s made in England, Birmingham in fact.

Single, because it’s handmade, hand-proofed, hand-bottled and hand-labelled in their distillery.

Potstill does not refer to the equipment, potstill refers to a mixed grain mash bill.

The vodka is distilled to 96%ABV, before being proofed to a generous and drinkable 43%ABV.

Commonly, vodka is made from a single ingredient, such as wheat, rye or potatoes. This premium English Potstill Vodka is created from the same mash bill as their signature beer and maturing whiskey. Five grains, each chosen for their unique flavour profiles, which gives Spirit of Birmingham English Potstill Vodka a delicious spice, natural sweetness & rich velvety mouth feel. Whoever said vodka has no flavour, was wrong.

Great as a sipping vodka, with your favourite mixer or makes a banging martini. Also, bring back the screwdriver!

Made from grains containing gluten.